What kind of dog does most of us want to have? I dare to say that the core is to have a healthy and mentally balanced dog. Secondary qualities are hobbies, for example coursing and shows. Then what makes a breed? To us, dog has to be able to do it's original job in the climate similar to their country of origin. In Chart Polski this means that they have to have correct structure to be able to run many kilometers a day and suitable coat for Polish climate.

How can we get all mentioned above? What are supposed to be priorities? To us the priorities lie in how the dog performs in every day life. Even if the dog is taken for coursing, shows or other hobbies, they still represent only a minority of a dogs life. For me the priority is a healthy dog with easy going temperament, and preferably a guarding instinct as cp has had in the past. To ensure health, we test our breeding dogs for eye problems and heart diseases.

The latest study shows that cp's in Poland have some eye eyeproblems and maybe even as many as ~20% of the population is affected by some eye diseases, which makes the average percentage of carriers to be even as high as ~45%!  Our breed is too small to make any dna tests at the moment. How can we avoid a total catastrophy on eye problems and other health problems? There is only one answer for such a small population that is closely inbred in general. (I have to point out that the Finnish population somewhat differs from other population by ancestors and it has in general lower COI). The answer is to use fresh blood, bring new dogs of unknown backgrounds to the breed. By bringing in fresh blood, we protect genetic diversity and therefore health of the breed.

Bringing in fresh blood can affect the exterior of the dogs, to temporary make the dogs not so clearly Chart Polski by exterior. However, we think that as long as the general structure is healthy and suitable for the original work, it is far more important to protect the genetic diversity than the shape of the head for example. Exterior and looks is the easiest part to breed, we can focus more on these aspects when the basics on health and genetic diversity are taken care of.

Some critisize new blood by saying that we don't know what they bring in to the breed. In a sense it is true, but my choice is to have multiple resessive traits in few dogs instead that the whole population becomes carriers/affected on few problems (and then we can't breed them out or even try to avoid mating carriers.) The fact is that ALL dogs carry diseases. Only thing that will prevent them from becoming problems is to make sure there is heterosis that will block the resessive traits.

And few words about focusing on "preserving" the looks by attending shows. Showing really doesn't preserve anything, it will always end up in only emphasizing some traits to the excessity and many breeds seems to be transforming to the "general showdog" with similar structure. The best way to preserve the original structure is to use the dogs to their original work. Just look for example Border Collies and compare which ones more resemble the original dogs, the ones bred for show or the ones bred for work?

Chart Polski's inbreeding percentage is in general too high (the average is about  ~10% in the long run, even if we have had litters with 0% COI) and the population is way too small (the estimated population around the world was few years ago only about 500-600). If the breeders keep on doing these closely inbred litters,the breed will go extinct very soon. As only few breeders seem to see this problem as a real problem, we have decided to get to work to preserve this breed also for the next 100 years (and hopefully more) by adding as much new blood to the breed as possible, and making the breed more interesting for people to own, by bettering their characters and working abilities, and maintaining good general health.

I hope we can get many people to attend our preservation and genetic broadening project. It can't be done by only a few breeders, we need also to have active puppy buyers to ensure good homes for all dogs from our breeding. We have many planned litters for upcoming years, so if you are interested in getting in to this fascinating breed and help preserve it for the future, please contact us!
Lähettänyt Katariina klo 6.19 Ei kommentteja: 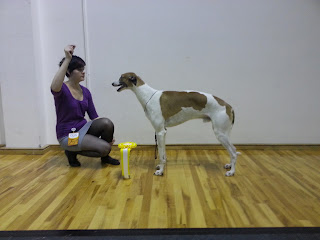